By buying this product you can collect up to 3 points. Your cart will total 3 points that can be converted into a voucher of €0.09.

With the fabulous SNES / NES to Wii Mayflash Adapter you can connect up to 2 Super Nintendo or Nintendo NES controllers to your Wii, Wii-U, Nintendo Classic Mini or SNES Classic Mini and enjoy the feeling of playing your favourite games with the original controller at a really affordable price.

The Super Nintendo / NES Mayflash Wii Adapter has an almost 100cm long cable, allowing you to play comfortably without having to worry about the controller not reaching your computer or home system.

Easy to install, this adapter is Plug & Play so no software installation is required. Just connect it to your Wii console system and you'll be ready to rock!

The Mayflash Adapter features turbo function and support for all buttons on both the SNES and NES gamepads. This adapter also supports special versions of SNES gamepad and third party controllers of the era, released throughout the 1990s.

Another interesting feature of this adapter is that if you press the START and the direction down buttons and hold then for 3 seconds on the NES / SNES the D-Pad will change to be operated from the left stick of the Wii Classic Controller. To return to the original setting, simply repeat the operation.

This is undoubtedly an ideal complement to enjoy the best classic games from your Wii console. We assure you that this adapter will not let you down! 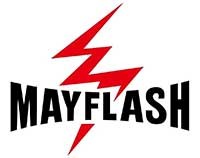