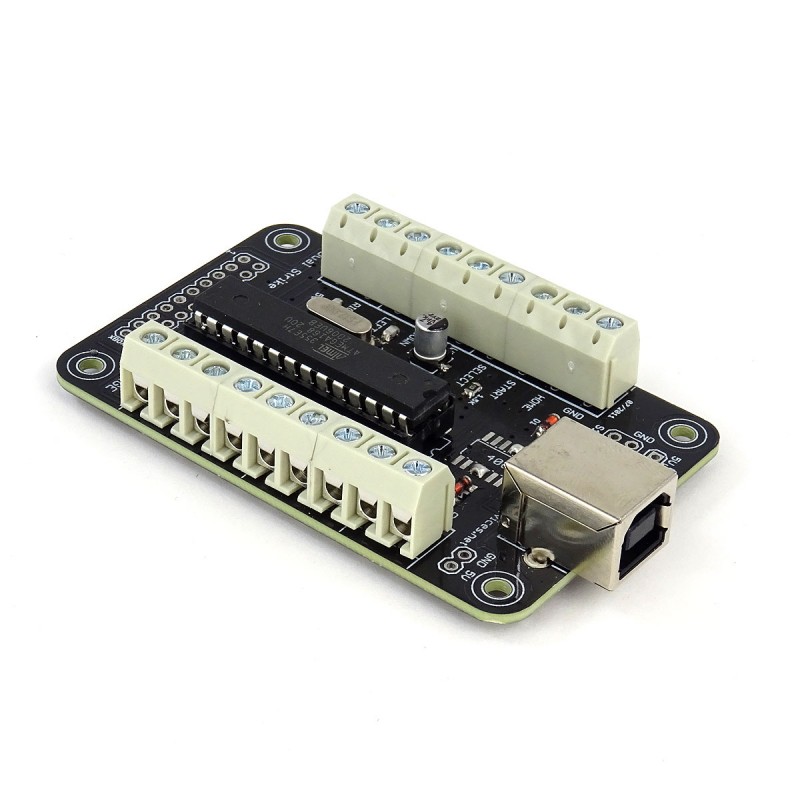 No reward points for this product because there's already a discount.

The Dual Strike USB Encoder from the German brand Arcadeforge is a premium encoder that allows us to connect our arcade controllers to several different systems. This great encoder is compatible with the PS3, Xbox1, PC, Rasbperry Pi (3b+ / 4), Xbox360 piggyback and as a keyboard encoder. It is automatically detected when connected to any of these devices. The Dual Strike encoder has piggyback support for the Xbox360 PCB controllers and is compatible with all PS3 buttons including the PS / Home button.

The Dual Strike can be configured in different modes when playing, as well as a configuration mode for changing settings and a firmware upgrade mode for installing newer (or older) software. The game modes are PS3 gamepad, PC gamepad, MAME keyboard encoder, XBox1 gamepad and pass-trough (e.g. XBox360). These modes can be enabled and disabled via the Config Manager app. For more information we have included a manual which can be downloaded from the following LINK.

This great encoder has almost non-existent LAG. This is because it is programmed as a HID keyboard encoder and not as a joystick. The encoder functions as a game controller on PCs with an operating system that supports HID-compatible USB devices (including Windows 7/Vista/XP/2K/98, Mac OSX and Linux). The Dual Strike also has a joystick mode switch for left analog stick, right analog stick and digital pad (as in MadCatz Fightsticks and Fightpads).

This board has 18 screw connection terminals with separate connection points for all power lines and signals. In addition, this encoder has a bypass function of dual mods compatible with USB (or similar) interfaces such as the XBox360 or Dreamcast. With the Dual Strike we can connect 8 action buttons, the Start / Select / Home buttons and the up, down, left and right of the joystick.

All connections to the buttons or directions are screwed directly on the side of the board, so the installation requires only a screwdriver and connecting a USB cable to the device used.

The configuration of the USB Dual Strike within emulators and so on is super simple. Once we connect the encoder to a PC, it functions as a MAME keyboard encoder with up to four different button configurations which can be selected while playing without having to reboot the device.

As an extra feature this encoder has a special Hitbox Firmware with SOCD for the Dual Strike. It can be downloaded at the following LINK.